When Your World is Shaken… 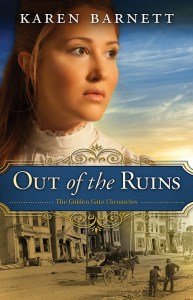 I’ve been thinking about earthquakes a lot lately. It’s a hot topic in Oklahoma where we’ve had an outbreak of them. Sometimes we have several a day, which is unusual, but for the most part they don’t do any damage. Still, it’s unsettling to know that we could be working up to the big one.

So instead of sitting around imaging how bad that could be, I thought I’d read a book on it – specifically Karen Barnett’s Out of the Ruins. Thank goodness we’re not in San Francisco and this isn’t 1906, because not only did the residents have to deal with the collapsed buildings, they also were faced with massive fires thanks to the broken gas lines across the city.

Out of the Ruins is a wonderfully researched story that involves turn-of-the-century medical research, a bustling coastal city and one of the largest natural disasters in our history.  Fast-paced action and unforgettable characters make this book shine.

And I have a copy to give away! If you’d like to be entered for the random drawing, please comment below. Tell me what’s the scariest natural disaster/weather event you’ve lived through. I hope to hear from some of my tornado neighbors on this one.

The winner will be announced Friday, July 25th. US addresses only, please.

And here’s more about Out of the Ruins:

While her sister lies on her deathbed, Abby Fischer prays for a miracle. What Abby doesn’t expect, however, is for God’s answer to come in the form of the handsome Dr. Robert King, whose experimental treatment is risky at best.

As they work together toward a cure, Abby’s feelings for Robert become hopelessly entangled. Separated by the tragedy of the mighty San Francisco earthquake, their relationship suddenly takes a back seat to survival. With fires raging throughout the city, Abby fears for her life as she flees alone through burning streets. Where is God now? Will Robert find Abby, even as the world burns around them? Or has their love fallen with the ruins of the city?